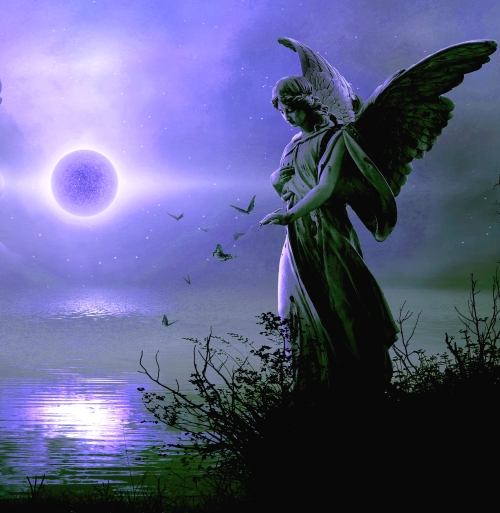 The Full Moon on Tuesday, July 16, 2019, at 24 degrees Capricorn is a partial lunar eclipse. Capricorn’s nature is dedicated and hardworking. But under a lunar eclipse, even the most loyal and devoted people could question what all their striving is for. This may be especially true if there is a background issue to deal with, such as ill health or the approach of a significant turning point like marriage, parenthood, or retirement. Powerful lifestyle changes, such as divorce, unemployment, or a relocation, could also hang new questions in the air, encouraging us to rethink our future path. Since Capricorn is an earth sign, we may be looking at whether we need to uproot ourselves.

Pluto and the South Node are conjunct between the Moon and Saturn, so we are drawn to the past and also need to detach from it. Decisions may have to be rational rather than emotional. Making a change is hard on the heart, yet we may lack the time to think about it and we have to favour practical action.  It may be that whatever occurs around this eclipse will not have any initial effect but given time it may feel more significant. Occasionally, eclipse activity is more subtle. Something we were quite convinced we would miss is simply forgotten.

Pluto, the South Node, and Saturn are also each in retrograde motion. Saturn being relatively slow-moving planet underlines that theme. It may seem situations are endlessly dragging on. There is often an internal logic to slow developments including highlighting the need to review a situation. Retrogrades can also coincide with disruptions or distortions, so that matters do not run smoothly or all is not as it usually appears.

Since the Moon is opposed by Mercury, we also have to wonder whether our needs are being accurately heard. If the answer is “no,” then the next question is: Have we stated these needs clearly and loudly enough? If not, the eclipse task is to look at how we can close that gap, how we can finally find that elusive voice and make our points clearer.

Despite Saturn’s obvious strength in his home sign, the planet’s retrograde status, its conjunction with the South Node and Pluto, and the total eclipse all add their various challenges. So, disciplines may be set, but such commitments could also be hard to keep. Perhaps that firm foray into a sugar-free diet could slip unconsciously into a subtle negotiation, with a tempting voice whispering, “But it’s a special occasion, and one chocolate won’t hurt!” Because retrograde planets can bring extra delays, we may think that the time of waiting for something seems intolerable and unreal. Yet it may be the most realistic timescale possible, under this extraordinary planetary pattern.

With Saturn in charge, reality may arrive with a thud, a sinking heart, or a cold, hard slap! But any fresh realization that follows from our changed circumstances also creates a different baseline on which we can build a new future. Saturn currently opposes Venus, so it would be reasonable to expect that some sort of pleasure may be curtailed or limited. Venus in Cancer needs nourishment, though, or finds comfort in giving the same to others — and therein may lie some form of healing. We may not have all we would like, but we can find some kindness to offer another.