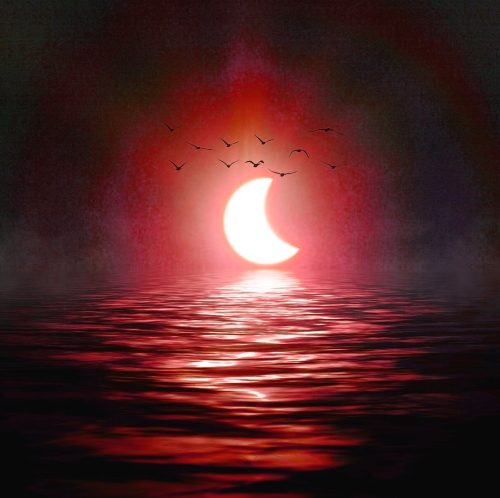 The month of July is highly charged as it brings us a solar and lunar eclipse.

This total solar eclipse on Tuesday, July 2, 2019, at 10° Cancer is refreshingly optimistic. It presents a highly charged New Moon in its home sign, Cancer, relating to home life, parenting, and nurturing as well as loyalties to other clans or groups we belong to. Eclipse events often coincide with something or someone being concealed or neglected.  Those touched by this Solar Eclipse and Lunar types will do better in tranquil, suburban areas then frantic city centres.

Mars enters Leo almost just as the Eclipse takes place on July 2nd which helps dampen the excessive Cancer vibes. Mars in Leo is proud, self-confident, and grand. We are spirited and have grand goals. We go after what we want in a direct, self-assured manner, desiring dramatic results. We prefer not to worry about details, and take the least complicated route to our goals.

Venus moves from Gemini into Cancer on the July 4th and indicates a very sensitive. protective, affectionate and deeply emotional romantic nature. Emotions that may have arisen from the eclipse on the 2nd may start to ignite again. It is a good time to be around love ones and family.

Mercury retrograde July 2019 begins on July 7th at 4° Leo and ends on July 31 at 23° Cancer. This Mercury retrograde is very intense and powerful because it conjuncts Mars. It is also squaring Uranus so it adds to impulsive and eccentric behavior. Nervous and rushed thinking brings the potential for losing your temper and getting in arguments.

The Full Moon on Tuesday, July 16th, 2019, at 24 degrees Capricorn is a partial lunar eclipse. The lunar eclipse is powerful and confrontational because of close conjunction to Pluto. Intense emotions, compulsive behaviors and power struggles can lead to a crisis. Capricorn’s nature is dedicated and hardworking. But under a lunar eclipse, even the most loyal and devoted people could question what all their striving is for. This may be especially true if there is a background issue to deal with, such as ill health or the approach of a significant turning point like marriage, parenthood, or retirement. Powerful lifestyle changes, such as divorce, unemployment, or a relocation, could also hang new questions in the air, encouraging us to rethink our future path. Since Capricorn is an earth sign, we may be looking at whether we need to uproot ourselves.

Mercury enters Cancer on the July 19th and suggests that your mind is greatly influenced by emotional and subconscious patterns - thoughts will affect your emotional state and visa-versa. You have a good memory, imagination and the ability to absorb knowledge subconsciously. The mental disposition is quiet, good-humored, easy-going and sociable, but somewhat changeable. Your mind is sound and strong, but not always quick or alert.

With the Sun in Leo on July 23rd, you will have a stronger sense of dignity, nobility and warmth of heart.  It’s time to shine, add a touch of color and drama to our lives, and perform. Like the flowers and fruit of the season, blossoming and ripened, this is a time when we want to enjoy ourselves and express ourselves.

Venus joins the Sun in Leo on July 28th and makes us more outgoing, affectionate, constant, ardent, passionate and warm-hearted romantic nature. Love is magnificent and grand. We take pride in love, and we are generous with our money as well. You tend to shower extravagant gifts on the object of your affections, often throwing lavish parties just to impress.